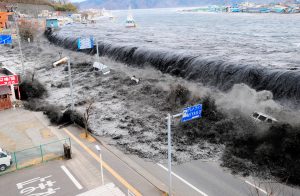 Almost six months have passed since the earthquake and tsunami hit northern Japan, ending the lives of over 20, 000 people. Reconstruction efforts move steadily forward, even as concerns about the possibility of radioactivity leaking from the damaged reactor continue.

In first few weeks after the quake hit a group of Japan residents decided to see if they could harness the power of social media in a way that might help. Quakebook was the result. Crowd-sourced through the blogs and tweets of various people connected to the tragedy, Quakebook represents a 21st century response, a natural disaster as seen through the eyes of a globally interconnected web community.

The song Black Water (video below) was written in conjunction with Quakebook. One of the saddest stories of the tsunami disaster was that of a schoolbus full of children who didn’t escape the wave. I wrote Black Water as a response to this specific tragedy.

So far tens of thousands of dollars have been raised through the project. Please consider buying a copy of Quakebook or just spend a buck on iTunes or CD Baby buying the song Black Water. 100 percent of proceeds from both continue to go to support relief efforts in Tohoku through the Japan Red Cross and HOPE International Development Agency.

The following is an excerpt from Quakebook:
The quake hit on Friday, and at first it didn’t seem like that big of a deal. We are two hours south of Tokyo and initial reports were all very conservative, talking about death tolls under 500 people. We were actually kind of impressed, considering the death toll in Haiti not so very long ago.

But that has all turned out to be very, very wrong. I suppose the death tolls are still relatively low, but nothing feels low about 10, 000 people, especially when people you know are crying because of lost relatives and friends in the north. Everyone is trying to do the “life as usual” thing but it’s not so easy to do. Today we had a graduation ceremony at my son’s school. As soon as the speaker mentioned the disaster, half the place was in tears. The Japanese are very good at “gaman” (enduring hardship) but as an emotion-expressing foreigner, I kind of hate that at times. Seems like a national cry might be a better idea.

Personally I find it hard to escape a certain sense of dread, like a dark voice in the back of my head that mocks my faith in light of the apparent meaningless of something like this. You can’t blame terrorists or human evil. Sometimes the earth just up and kills all kinds of people at random, and like Shusaku Endo repeated so many times in that haunting novel of his, God is silent.

I find myself reverting to a sort of fairy tale to make some sense of it. I would like to believe that the only problem is that our communicators are broken – that once long ago in a unfallen time, God had such an intimate relationship with his creation that we would know long beforehand about any natural irregularities, and always be safely out of the way. Maybe we are just crippled by our inability to hear the Creator, and we live out of step with his creation because of it.

I know some people will be offended by my telling of such children’s stories at a time like this, so I will stop. Today the panic seems to be getting worse instead of better. No one is sure whether or not we will be running from a radioactive cloud within the next few days or not. Frankly, I start to think that Twitter and Facebook are more interesting as a study in human psychology than they are useful for getting clear and true information. You have your fear-mongers and your under-staters, and everyone in between. And CNN can be even worse with their “possible scenarios”.

The question “What is Truth?” confronts me on so many levels in a crisis like this.

—-
John Janzen is a Canadian living and working in Nagoya, Japan where he and his family have spent the last 9 years trying to figure out what “ foreign mission” might look like in the 21st century. His writing, fiction and non-fiction, has appeared in academic journals, literary magazines, and recently in Quakebook, a compilation of responses to the March 11th Japan earthquake. He recently completed an M.A. thesis on C.S. Lewis, which has been adapted in Heresy in Narnia: Departures From Evangelical Orthodoxy in the Writings of C.S. Lewis, available on Amazon. You can connect with him on his blog .