This is part five of a five part series on Jesus and Nationalism.  It reads as one fluid written sermon so you may want to read the rest of the series.  I have never spoken this sermon but figured I would use the blog to get the text out there…

So, lets return to where we began this morning.  Does the painting that puts Jesus in the center of our national identity help or harm the cause of the Kingdom of God?  In my experience in God and politics conversations that I’ve had, many people truly believe that God has divinely foreordained the form of government in America.  I have heard people appeal to the Constitution and its amendments as though they are a moral supplement to the Bible.  I have friends who have made comments to me on several occasions about how the right to bear arms is an expression of Christian freedom.  Or some will start a conversation on some kind of ethical issue by saying, “but the constitution says…”

In other political circles, the conversations sometimes can become dangerous in that people can put all of their hope in government to solve the world’s problems.  But, as we have seen this morning, the New Testament clearly is careful not to align the Church with any nation or political ideology.  This is not to say that God doesn’t want governments to preserve order and justice in societies, but we must understand that all human governments are his accommodation to our broken world; never a path to his ideal plan for the cosmos.  When we place the cross and the flag too closely together or put Jesus with our Constitution (as the picture we began with does) we are in danger of losing our unique identity as members of a Kingdom that is distinct from all other nations of the world.  The beautiful, counter-cultural kingdom of God!

I want to close by giving you an extreme and yet true example of what can happen when we align our national interests with those of God.  The following is a quote from a sermon entitled Comforting the Soldiers, Preached by Puritan Preacher Cotton Mathers, in 1642: 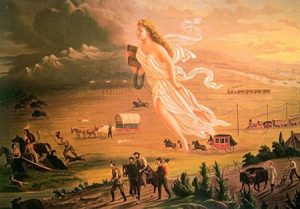 When our Christian identity gets lost in the identity of a nationalistic agenda, the results are almost always the opposite of God’s will for our world.  No nation is the “new Israel” except the nation that is by its very definition transnational: the church!  So, Whose Kingdom and Which Lord are we going to serve?  Have we bought into the lie of Caesar?  Have we believed that our American political agenda is parallel to God’s?  May it never be!  May we choose to bear God’s image by reflecting his Lordship over all the Caesars of the world.  May our politics and national identities, never get in the way of making King Jesus known.  May we decide that any form of politics that gets in the way of that vision (whether liberal, conservative, or any other ideology this broken world comes up with), must be brought down to their knees to bow at the throne of Jesus Christ!

THANKS FOR FOLLOWING THIS SERIES THROUGH!  HOPE YOU GAINED SOME INSIGHTS AND EVEN WHERE YOU DISAGREE, YOU ARE ABLE TO ASK NEW QUESTIONS!

ANY FINAL QUESTIONS OR THOUGHTS ON THE SERMON AS A WHOLE?